Parisians, hop in the car with the Indian start-up Zify! 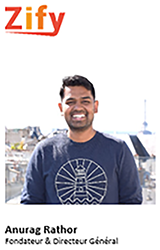 Zify is an instant and dynamic carpooling platform that connects commuters with drivers that have empty seats in their vehicles and are travelling in the same direction. Zify enables individuals to share their daily commutes between home and office and save significantly on their commuting costs, reduce congestion and lower carbon dioxide emissions. Zify is headquartered in Paris, France.

Since our arrival, Zify has created a niche for itself and become a leading company in the sustainable transport sector. Zify has won multiple awards for innovation across France and Europe and has created a team of five bright individuals. Zify has partnered with the Île-de-France-Mobility to promote carpooling across the Paris region and has also successfully integrated with the public transport model through the ViaNavigo application. Zify is also one of the winners of the French Tech Ticket, a flagship French government initiative.

The Make our Planet Great Again initiative is one of the most forward thinking and important initiatives taken by any government across the globe to fight the challenges of global warming. It is in line with the vision of the Paris Agreement and creates an example of how a successful partnership can be formed between the government and companies to create a better, greener world for the next generation. It should definitely have a huge impact on our development in France as it is a great endorsement of our vision and the future we intend to create for the cities of tomorrow.

Business France not only helped us with our initial requirements for setting up our operations in Paris, but has also connected us with the startup ecosystem and other important players, corporates, agencies, and suchlike in the market. Their guidance and help enabled us to make the right choices and focus on building an eco-friendly solution for the French market.